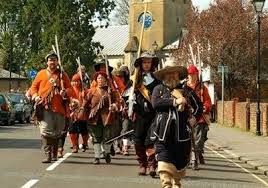 The last of this year’s English Civil War Society major events is based around the siege of Gloucester in 1643 and takes place over the weekend of 15th and 16th September. We shall be recreating the siege lines and parts of the battle. There will be a battle re-enactment in Gloucester Park at 2.30 pm on both days. There will be drill displays in King’s Square at 11.00 am and there will be a living history display running from 11.00 am to 4.00 pm on both days in Brunswick Square.

The City of Gloucester is a major setting for confrontation between Parliament and Royalist forces, in 1643.
We re-create during the 375th anniversary year; Parliament needed a victory in 1643. The Earl of Stamford arrived in Gloucester in about November 1642 and left a regiment there for its defence.
He had fought for the King during the Bishop’s War of 1639 but admitted the rebellious Scottish clergy, proving his Puritan credentials.
In Gloucester. Edward Massie was appointed governor, arriving on the 8th December 1642. A trained band of local men were commanded, in part, by men that accompanied Massie to the city. In addition there were some Scots. In total there were two bands of foot and since there were so many soldiers in the city they had to be billeted on the local population. There are also problems with regard to pay – parliament was short of cash and the unpaid soldiers were naturally mutinous.
In February 1643 Prince Rupert captured Cirencester and Bristol was captured on 26 July. Gloucester was now an outpost of parliamentarians. Corn prices started to rise. Citizens loyal to the Crown decamped from Gloucester and those of a nervous disposition also left if possible.
The king paid Bristol a visit in August. He was met by cheering crowds – who probably knew better than appear anything else! But the main reason for his visit was to settle the acrimonious arguments that had burst out between his own commanders and to plan what to do next. Lord Hopton’s Western Army were not happy with the number of casualties they had sustained. It was also evident that the Cornish weren’t keen on leaving their region.
Charles placed his nephew, Prince Maurice (Prince Rupert’s brother) in charge of the Western Army and sent him off to vanquish Parliamentarian hotspots in Devon such as Plymouth. Ralph Hopton, who was still recovering from injuries caused by an exploding munitions waggon was made deputy governor of Bristol under Prince Rupert. Charles arranged for the army he brought from Oxford to be divided into a garrison for Bristol and a force to attack Gloucester. This was commanded by the king – though he very sensibly took Prince Rupert and Patrick Ruthven (Earl of Forth) with him.

By that time Gloucester was the only Parliamentarian stronghold between Bristol and LancasterIt was a Parliamentarian stronghold that allowed them to interfere with royalist communications across the Severn. This interfered with the drove roads along which Welsh provisions came to the king, and recruits to his Armies. Gloucester was a walled city with a castle but the original Roman walls, didn’t go all the way round and the castle had been in the process of being dismantled. There was also a serious shortage of powder despite the fact that Massie had written to Parliament asking for money, weapons and reinforcements. As elsewhere in the country Gloucester’s population found themselves shovelling soil as fast as they could to create earthworks to strengthen their city’s defences. It is not recorded how they felt when Massie started burning the suburbs beyond the city wall so that the Royalists wouldn’t have any cover, from which to attack.
The king and his army “summoned” the city to surrender on the 10th August 1643. He settled down for a siege despite the fact that Rupert advocated storming the city, recognising that it wasn’t equipped for that eventuality. Charles, as at Turnham Green, before London, was worried about the casualties.

By the end of August the Earl of Essex was on the road from London to lift the siege. Charles who had been shelling Gloucester could not risk being caught between Gloucester’s garrison and Essex’s army so raised the siege and let Essex occupy the city.

The next eighteen months were somewhat tense for the inhabitants of Gloucester. They had already sold off their plate to pay for provisions prior to the siege but now they had to deal with the fact that over two hundred houses had been destroyed by the Parliamentarians to prevent the royalists from finding cover close to the walls, the town ditches were flooded and the shelling had done rather a lot of damage. The church of St Nicholas has a decided lean even today because of the royalist shelling.

We know that Massie would have had to surrender if Essex had not arrived when he did at Gloucester. He was running extremely short of gunpowder. Gloucester Civic Trust have a helpful article on the siege. In 1645 Massie’s loyalty to Parliament came under question and by 1659 he was actively plotting for the town’s take over by Royalists. By that time the town which had always been largely Presbyterian in sympathy and organisation looked rather more divided in its loyalties.

More significantly, the fact that the king had to march away from Gloucester brought the Royalist summer of victories to a close and set the scene for the Battle of Newbury which took place on 20 September 1643. Essex and his army were returning to London. Charles chased after Essex and overtook the Parliamentarian army at Newbury. If Essex wanted to get back to London he had to get by the Royalists. Later Essex would be accused of lacking in military flair but on this particular occasion he made a surprise dawn attack on Charles’ army. It was touch and go for Essex who was almost encircled at one point in the battle. Despite that he saw off Prince Rupert and his cavalry and when battle broke off it was the royalists who had to give way because they did not have sufficient ammunition to continue the encounter.

A paper from the Gloucester Civic Trust